Posted by girlee gee at 8:30 AM No comments:

October's dinner club was Level III, located in the Marriott on Post and Mason. The ambience is nice, very modern and, because it was a slow night, we got a nice big table - a rare treat at any SF establishment. I started off with one of their signature cocktails, Emperor Norton's Mistress, which was fairly tasty and not too sweet for a foofy drink.

From the Level I menu we opted for potatoes and potatoes. Garlic fries and potato crisps with blue cheese dressing. Both were tasty and the garlic fries had just the right amount of garlic. From the Level II menu we had the Kobe sliders, tuna tartare, mac & cheese and fish tacos. The mac & cheese was a hit (though unable to top the mac & cheese at RNM). The tacos and tuna were fairly unremarkable and the Kobe sliders were so dry that we all had to take a drink of water to get each bite down. We were really looking forward to them, so it was a big let-down. From the Level III menu we had the Anchor Steam Braised Short Ribs which were nice big chunks of yummy meat and came with some so-so risotto.

Our wine selection, picture below, was a nice addition to the meal. Siva loved it the most, and I think I'm going to have a long-term affair with red blends. This particular Syrah was a 2004 Jade Mountain from the Napa Valley.

I just noticed on their site that they have a half price happy hour 4-7 weekdays. That might be a great way to check them out. 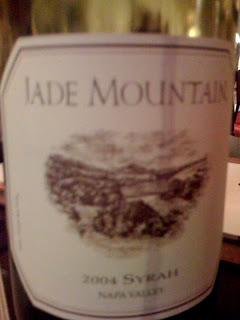 Posted by girlee gee at 8:38 AM No comments:

Cav Wine Bar & Kitchen was the dinner club selection for September. I think there is quite a lot to be gleaned name - definitely a wine bar first and a "kitchen" second. Their wine list certainly lives up to the reputation. It was absolutely huge but well-organized by country. Given such a vast list to choose from, we opted to pare down by selecting a wine from a country we'd rarely find on a standard wine list. Who knew that an Israeli Syrah could be such a find? It was a Clos de Gat, Syrah, Har'El, 2005 and the highlight of our evening. We had a full meal of both the small and large plates and found the food to be uninspired, save the Crispy Pig Trotters which we all enjoyed. We topped off our meal with a selection of three cheeses. Cav serves up an impressive variety and Dawn ordered us the perfect combination of mild to sharp. They also offer a house-made charcuterie and cured meat selection that we'd like to explore someday.

The final consensus was that we'd go back for the wine and cheese. However, if it's tasty morsels you seek, dine elsewhere. 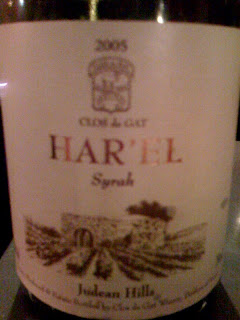 Posted by girlee gee at 2:10 PM No comments: 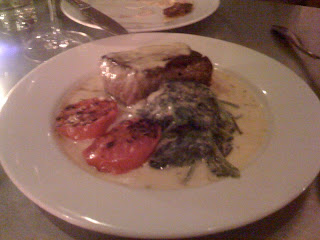 Posted by girlee gee at 2:09 PM No comments:

I took this photo after we disseminated the dessert at Sauce in August. I'm still dreaming of the pb&j and donuts. The food was pretty tasty, but I'd go back just for the dessert - oh, and the portabello mushroom fries. Plus I still need to try to the Guinness Milk Shake. 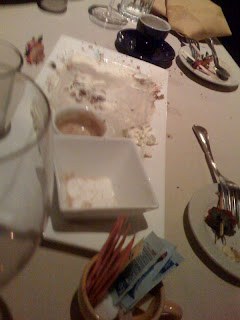 Posted by girlee gee at 2:00 PM No comments:

We're adding our wine tasting to this blog as well.
On Saturday, Gretchen, Lori, Jim & I enjoyed 2 bottles of Zinfandel and lots of cheese, fruit, bread & crackers. Yum.
While both Zinfandels were from the Dry Creek Valley, they couldn't have been more different.

We started with 2005 Reverend Zinfandel from Roshambo. Super cute label!
Roshambo says this about the wine:
Why do we call this wine the reverend? Wait until you taste it. Just like an old fire and brimstone sermon, it starts easy and lures you in with scents of Christmas spices. And then it kicks up the volume with an explosion of juicy red and black berries, plums and chocolate. To finish you are called up to the altar to be healed by a smack to the forehead of spicy, smooth tannins. You'll be back next Sunday for some more.
We all thought it was more full bodied than what we expected of a Zin and thought the pepper was a bit overwhelming. We all agreed it would be probably be great with a big 'ol steak but didn't love it as is.

Then we had 2006 Zinfandel from Preston of Dry Creek. Preston says: Our Zinfandel is jammy and briary, with aroma sensations of brushing against wild blackberry bushes on a hot summer day. A bit of pepper, clove and cinnamon provides punctuation. Small crops and shallow hillside soils bring intensity of flavor while the warmth of our end of Dry Creek Valley ensures generous ripeness and a soft, rich finish. Petite Sirah is added to the blend to increase complexity and to emulate the field- blends of earlier times.
We found this wine to be much smoother and easier to drink. While we still tasted the pepper, it wasn't quite as strong and didn't over power the fruityness. We all loved this wine and it was gone in no time! 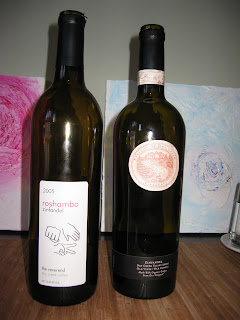 Tonight Gretchen, Dawn, and I ate at Sauce in Hayes Valley (Yelp reviews). We started the meal off with some cocktails -- I forget the drinks' names, but the ladies got the same drink -- something based on a mix of iced tea and lemonaide with (I think) some vodka, while I had a lime, gin, and soda concoction. The drinks were OK but generally a bit too sweet. For the meal we ordered most of the items from their small plates menu: portabella mushroom fries, crab wontons, ham and cheese tater tots, seared tuna, steak sate, bacon-wrapped scallops, potato and bacon "nachos", and we also got the peach and cashew salad. We had a 2006 Pinot Noir from Sonoma, CA (I think -- I forget the name, glad I saved the cork, gotta find it!). Overall the food was good (I thought): we really liked the portabella fries, the tuna, and the crab wontons. The tater tots were somewhat bland. I liked the steak bites on-a-stick, but no one else did. The scallops were OK but pairing them with sauted red onions and brussels sprout leaves was unexpected and a bit off-putting. The nachos -- you just can't really go wrong with potatoes, bacon, cheese, and sour cream. The peach salad was good, but the cheese could've been stronger/sharper to offset the sweetness of the peaches, which were a bit unripe and crunchy. The wine was quite good, too. For dessert we ordered and shared their sampler platter, which at $20 was a bargain, since it was a huge platter with four of their normal desserts: cinnamon doughnuts with a bourbon-caramel dipping sauce (GREAT), "PB&J" cake (pound cake, berry compote, and peanut-butter ice cream sandwiched together -- also tasty), 4 mini-scoops of butter-pecan ice cream, and 4 fresh strawberries with whipped cream and brown sugar. Dessert was fun! The service was decent, and I think we all had a great time!
Posted by Jim G at 2:30 AM No comments: